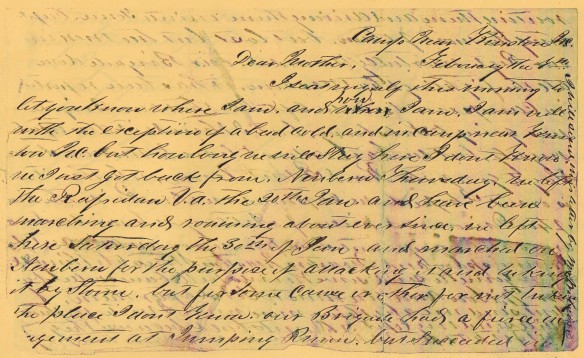 Camp near Kinston, N. C. [1]
February the 7th [1864]
Dear Mother,
I seat myself this morning to let you know where I am and how I am. I am well with the exception of a bad cold and in camp near Kinston, N. C. but how long we will stay here I don’t know. We just got back from Newbern [2] Thursday. We left the Rapidan Va. the 20th Jan and have been marching and roaming about ever since. We left here Saturday the 30th of Jan and marched on Newbern for the purpose of attacking it and taking it by storm. but for some cause or other for not taking the place I don’t know. Our Brigade had a fierce engagement at Jumping River [4], but succeeded in routing them and driving them on into town. Capturing most of them. but lost but two men[5] in our Regt mortally wounded. Our Brigade done all the fighting that was done. It has been reported in camp ever since we left Va.that our Brigade was going to Salisbury. but I think it doubtful myself but we have orders to leave tomorrow. Some say to go up the Road I dont know, whether it is or not, I hope so. We captured on this raid the rise of 400 prisoners 2 pieces of Artillary 40 horses 300 small arms and equipments some few negros an amount of commisary and quartermaster stores clothing &c. [6] I am going to send some things to Mebanesville by Mr. Wilson and you must send after them. don’t send me anything more until I write for them. I will send my coat and pants back because they dont fit at all. I shall write no more this time J. K. W.

Transcribers comment: This note is written on both sides of a scrap of paper. It is written in ink, in a fairly neat and legible hand, although the ink bleeds through the paper. Walker says “I seat myself this morning…” Because of the steady hand and flourishes in the letters, I picture the writer sitting at a table somewhere with the ease to leisurely write, vs sitting around a campfire with a board balanced on his knee.

1)  John K. Walker was a member of Co. K, 6th North Carolina State Troops, who were members of Hoke’s Brigade. The Compiled Service records show their movements as Follow: “Marched from Raccoon ford to Gordonsville Virginia January 21, 1864. Took the cars at that place January 22 arrived at Garysburg, N. C. January 24 and remained there about six days. Took the cars at that point for Kinston. Marched to Newbern. Participated in the engagement of Bachelors Creek 1st February 1864. returned to Kinston February 4, 1864. Whole distance traveled about 300 miles.”

2) New Bern, North Carolina. The Colonial Capitol of North Carolina that had been under Federal Occupation since the March 1862 Battle of New Bern. The reason Walker was here in 1864 was to recapture this Carolina Port and it’s supplies to support the Army of Northern Va in the upcoming Campaign.

5) A search of the 6th North Carolina Roster has been unsuccessful in identifying two mortally wounded soldiers at the time of this battle.

6) General Pickett reported the following in his official report of the incident: “The result may be summed up as follows, viz.: Killed and wounded, about one hundred; captured thirteen officers, two hundred and eighty-four privates, fourteen negroes, two rifle pieces and caissons, three hundred stand of small arms, four ambulances, three wagons, one hundred and three animals, a quantity of clothing and garrison equipage, and two flags.”