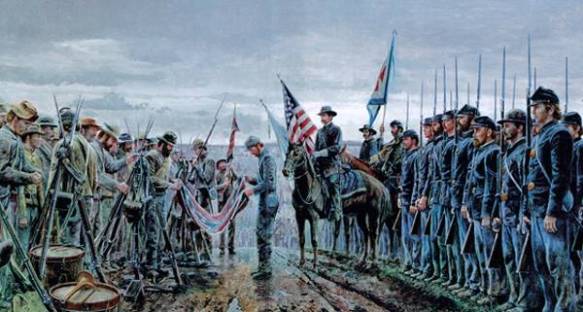 I am sitting in my office today reflecting on why I’m not with my comrades at Appomattox and lamenting a bad back that kept me out of the field on this sesquicentennial anniversary. Dark clouds drift overhead making the day as somber as this occasion calls for.

Of the more than 2,000 boys and men that served with the 6th North Carolina State Troops over the course of the war, Only 181 received paroles at Appomattox on this day. Only 72 still carried arms!

Two questions arise: Why so few men and why so few arms?

As part of Lewis’ Brigade, The 6th North Carolina participated in a desperate attack on Fort Steadman in Petersburg on March 25, 1865. Although successfully getting into the Fort as the Yankee defenders fled, a counter attack made their position untenable and their retreat deadly.

“… it looked almost impossible for any of us to escape when we were ordered to retreat[.] the grape and shell were comeing so thick that some laid down and was taken prisoners but when I thought of Point Look[out] you better know I come out.”

His was the voice of experience. William had already spent a year of his young life in this horrible prison and her wasn’t anxious to return. He was barely 20 years of age.

Many others on the 6th Regiment did not fare so well:

Along with Privates Levi Allen and Harvey Workman, Colonel Tate was severely wounded. Bedford Merthes, William Miles, John Alerson, Jacob Walker and many others were captured. Private James Turner of Company I had been “killed dead” with a bullet through the head. He was not alone. In total the 6th NCST lost 5 killed, 25 wounded, and 39 missing. The total loss for the Confederates was about 3,000.

Resettling back into cold, miserable, muddy trenches, the Confederates ducked Federal snipers and waited to be called into action again. This occurred on March 29, when the line was broken at Five Forks and the Confederates had no choice but to retreat. The exhausted soldiers of the 6th NCST, part of Gordon’s Corps, were once again called on to be the rear guard. General Gorden recalled those days by saying:

“On and on, hour after hour, from hilltop to hilltop, the lines were alternately fighting, and retreating, making one almost continuous shifting battle.”

Then another disaster struck, on April 6, 1865, when they were suddenly attacked by Sheridan’s Cavalry at Sayler’s creek. The weary Confederates fought valiantly, but were soon overwhelmed. “My God! Has the army been dissolved?” exclaimed General Lee, watching the disaster from his vantage point on a hillside. Almost 8,000 men, 8 generals, numerous artillery, miles of wagons and dozens of battle flags, including the battle flag of the 6th NCST were lost in one broad stroke. Exact casualties for the 6th NCST are elusive. 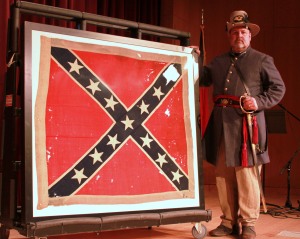 Those that escaped had not given up and began to regroup. The battle hardened veterans marched toward Farmville in an orderly brigade formation and after crossing the Appomattox, bivouacked north of Farmville, finally receiving much needed rations. Continuing northwestward, exhausted men started falling out and whispers of surrender were being passed amongst the officers, but most of the foot soldiers marched onward, hoping to put more distance between themselves and the enemy, looking forward to additional rations and a rest in the safety of the distant mountains.

The Federals were on the move too, eventually flanking the escaping Confederates. On April 9th the Federal infantry and cavalry had formed an impassable barricade across the Confederate route of retreat and… well you know what happens next.

What happened to the men of the 6th NCST?

Did they all surrender? Were there really only 181 left? Beside suffering great losses at Rappahannock Station in 1863 and the arduous Valley campaign of 1864, the 6th NCST continued losing men right up to the surrender. I’m not sure such statistics exist, but it would be interesting to account for each soldier, whether killed, wounded captured…or just drifted away.

I wonder how many fell into the that last category. I am certainly not suggesting they deserted, but when the surrender was announced there was a great fear of retribution. Men feared being hung or sentenced to death by firing squad or, worse yet, being thrown into a far away Yankee prison. This was especially true for the officers, who might be accused of treason for leading soldiers against the Federal government. As young William Walker said above, he would take the chance of getting killed rather than face capture and imprisonment. With many returned paroles in the ranks, the infamous experience in northern prisons was well known to the men in the ranks. It would not surprise me to learn that when the fighting was over and surrender announced, many men simply slipped away and returned home.

And what happened to all the officers? After Fort Steadman, Colonel Lewis lamented: “Our loss was considerable. I lost all the field officers of my Brigade wounded.” Lewis himself was wounded and captured in the fighting after Saylers Creek.

This might explain the low number of men and lack of officers.

I recently saw the following quote:

“At Appomattox when word got out [of the surrender], a lot of my boys smashed their guns against the trees and burst out crying. They were just wild with grief. But when General Lee came riding by, they drew up to him, clung to his boots and stirrups, and tried to kiss his hand. They knew he had done his best for them.” Colonel Henry Rutledge – 25th North Carolina

Was this a common reaction? Could the men of the 6th NCST done likewise?

Another explanation is that they “lost” them on the march. As a reenactor of long experience, I have been on some extremely tiring marches and my aching arm would have loved to have “lost” my rifle, but the cost to replace it prevented me from taking such a foolish action. If I were a real soldier, I may not have cared about the cost, but I would certainly care about a weapon that might keep me and my comrades alive. As far back as 1862 A Maryland boy was quoted: “They were the dirtiest men I ever saw, a most ragged, lean and hungry set of wolves.” But he could not help adding “They were dirty, but their rifles were clean and their cartridge boxes full.” Surrounded by the enemy and still ready to fight, I cannot imagine this would not be equally true in 1865. If a gun was “lost” it may have been knocked loose while running through dense woods pursued by the enemy or accidently dropped while scrambling up the slippery bank of Sailors creek, but I can not imagine a soldier purposely discarding such an important tool of survival.

Another, more logical,  explanation my be that some of the guns were hidden away to be recovered after the surrender and taken home with the men for protection.

If anyone has ever read a veterans explanation for this mystery, I wish you would share it.

It is now late afternoon on April 9, 2015. One hundred and fifty years ago Captain Joseph H. Dickey, Captain of Co. I of the 57th NC had been given temporary command of the 6th NCST since the remaining officers were too junior. When Captain Dickey surrendered the regiment there were only  6 officers, 175 men and 72 weapons. The war was finally over… except for the long walk home. 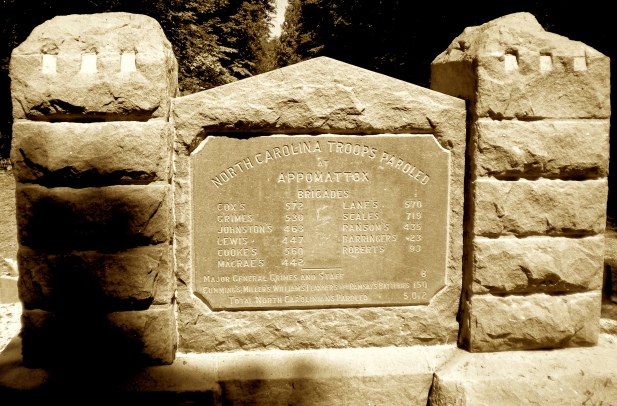