Today I am Honoring the men of the 6th North Carolina State troops who were casualties of the battles around Fredericksburg, as part of the Chancellorsville Campaign, 150 years ago on May 4, 1863. 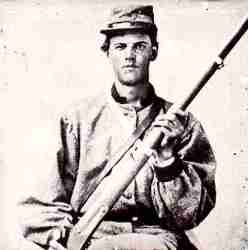 One of the members, Sergeant Bartlett Yancey Malone of Company H,  left his impressions of that day in his diary:

“…we was marching about first from one plais to nother a watching the Yankees untell about a hour by sun and the fight was opend our bregaid went in and charged about half of a mile and just befour we got to the Yankee Battery I was slightly wounded above the eye with a peas of a bumb[.] non was kild in our company. Lieutenant Walker was slitley wounded in the side. I. R. Allred was wounded in the arm hat to have it cut off. I. E. Calmond was slitly wounded in the arm. I. L. Evans had his finger shot off—“

“the fift day we found the Yankess had all gon back on the other side of the river and we marched back down to the old camp ground and taken up camp again.”

Neither attack succeeded, but the cost to the Sixth North Carolina was high. Did they fight at Chancellorsville? Not exactly, but Hoke’s Brigade in Early’s division made a stand at Fredericksburg and played an important role in the Chancellorsville campaign.

We honor their memory today.

(transcribed and authenticated by Rick Walton, from the “Hillsborough Recorder”, May 20, 1863)

List of Killed and Wounded in the Sixth North Carolina Troops
Below we present the casualties in the 6th N. C, Troops, in the Battle of Chancellorsville;

Saturday April 20, 2013 was a beautiful spring day, although still a little chilly. It was bright and sunny…one of those days when you can’t wait to get outside. It was a beautiful day to work in the yard among the blooming trees of spring. It was a day we choose to meet at the Oakwood Confederate Cemetery.

Members of the Colonel Leonidas L. Polk SCV camp 1486 from Garner, NC converged on Oakwood Confederate Cemetery at 9 AM armed with buckets, brushes, hoses and bleach.

There are many ways to honor our Confederate ancestors…or Union if thats all you have. In my case, I have neither, but have adopted the 6th North Carolina State Troops as my substitute, since my ancestors were still in Europe at the time of the American war between the states.

We honor their memory with ceremonies and speeches, reenactments and blogs, but sometimes it requires more. Sometimes you need to get down on your knees….and scrub. Thats what we did on Saturday. We scrubbed away a years worth of dirt, pollen and algae that had stained the shining white headstones. We want them to sparkle on Confederate Memorial Day.

The work was pleasant, surrounded by a dozen friends with the same mindset. The warming rays of the sun chasing away the chill and playing hide n seek as the fluffy white clouds gently floated by overhead. Everywhere you looked were the pinks and purples and whites of springtime blossums to cheer you on. The hum of diesel engines from the machines working on a nearby street faded into the background as the wind rustled the newly sprouted leaves. The leaves had that bright green, early spring color that dappled the sunlight, giving everything underneath a fresh look. Birds chirped and nearby the men spoke in quiet undertones, having a reverence for this sacred place. It was a very peaceful and refreshing way to spend a lovely spring morning. Looking back at the orderly ranks of headstones shining brightly in the noon-time sun when we finished filled you with the pride of a job well done. We had paid our tribute today with a little bit of elbow grease, bleach and good fellowship. We are ready for Memorial Day. 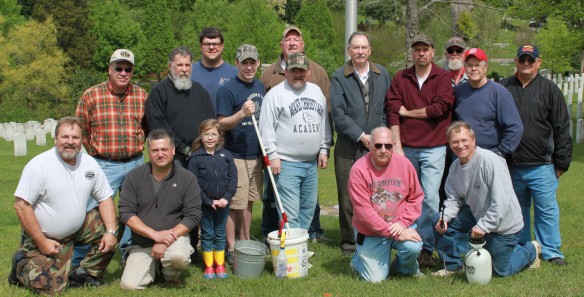 See all the pictures at: