Friday, June 22, 2011- Manassas, Va.- We were getting close to Manassas. We had just exited interstate 95 at Dumfries, when it occurred to me that we were near the place the 6th North Carolina State troops camped during the winter of 1861-1862.

“Have either of you ever visited Camp Fisher, near Dumfries?”, I asked my mess mates William and Matt.

They hadn’t, so I suggested a detour since we were nearby. They agreed. Now all I had to do was recall exactly where it was. I hadn’t visited here myself for 4 or 5 years and I hoped I could recall the exact neighborhood the marker was in. I vaguely recalled a historic marker on the roadside right before the entrance which would give us a clue.

“Is that it?” someone yelled. 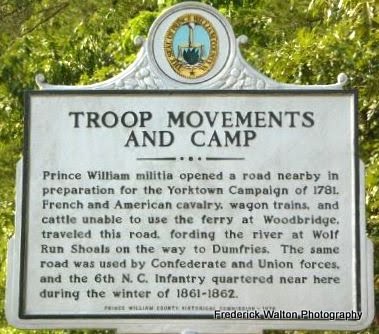 “Yes” I cried  at the last minute and we turned in. I was hoping I remembered this right! We cruised along the divided roadway through a densely populated suburban neighborhood. I started getting a little nervous. It seemed like we had driven a long way.

“I remember it being on the right hand side, halfway down a hill” I said as we rounded a bend and started down an incline. And there it was, just as I remembered. 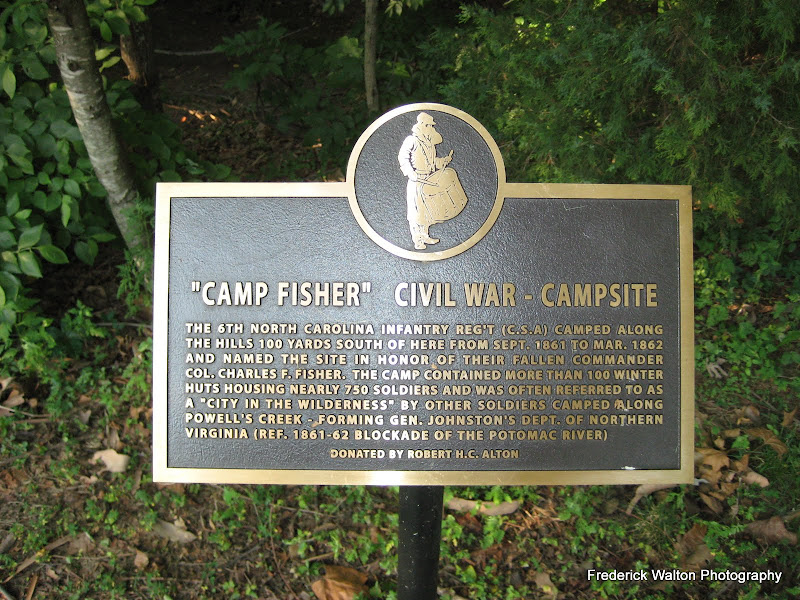 The marker had been placed during a ceremony in 2005 by a fellow named Robert Alton who lived in the Montclair subdivision where Camp Fisher once stood. He had contacted me back then looking for information on the 6th NCST which I provided. As a civil war buff, he drove a project to mark this important landmark which had all but disappeared beneath his neighborhood.

“Camp Fisher” Civil War Campsite
The 6th North Carolina Infantry Reg’t (C.S.A.) camped along the hills 100 yard south of here from Sept. 1861 to Mar. 1862 and named the site in honor of their fallen commander Col. Charles F. Fisher. The camp contained more than 100 winter huts housing nearly 750 soldiers and was often referred to as a “City in the Wilderness” by other soldiers camped along Powell’s Creek—forming Gen. Johnston’s Dept. of Northern Virginia (Ref. 1861-62 Blockade of the Potomac River).

After the 1st battle of Manassas, the 6th North Carolina marched to Camp Jones at Bristoe Station, 8 miles away. There, In August 1861, They spent their time drilling, while waiting for a new commander to lead them. W. H. C. Whiting, the new brigade commander declared their camp “The best camp in the Brigade”, but was unable to stop the sickness that was spreading through the men. By mid September Whiting decided to move the third brigade, consisting of the 4th Alabama, the 1st Tennessee, the 2nd Mississippi, and the 6th North Carolina, along with Imboden’s battery to the vicinity of Dumfries on the Potomac near where defensive batteries where being constructed to control traffic on the river. The camp was named in honor of their fallen commander, Colonel Charles Frederick Fisher.  Their mission was to patrol the river banks and support the batteries . 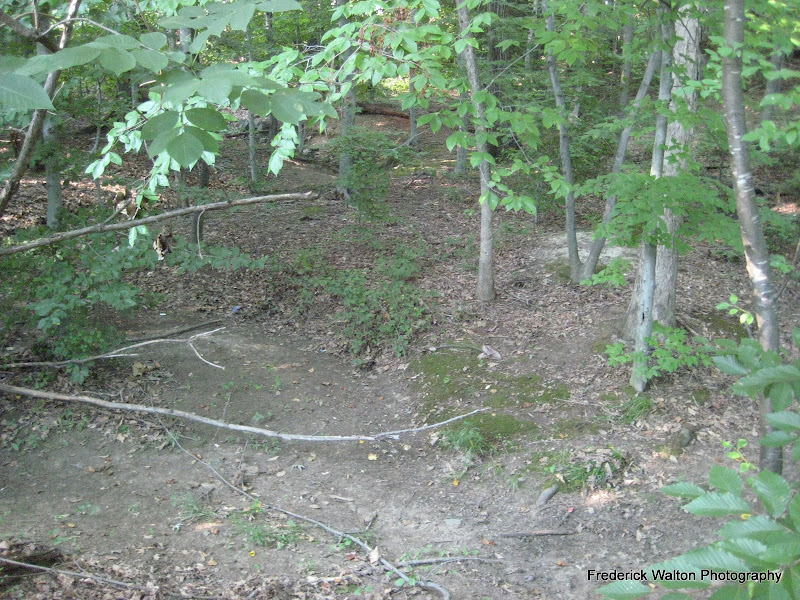 Woods in Montclair near Camp Fisher

In his book “Relic Hunter”, Howard R. Crouch describes his luck in rediscovering the camp in the 1970’s. It was well known by locals, but hidden deep in the woods and rarely seen by anyone but game hunters passing through. He recalled rows of chimneys marking the long gone company streets. His metal detector unearthed a number of 6th NCST Belt buckles, NC buttons and other dropped and discarded objects associated with the military settlement. I wish I could have been with him.

Today the camp has disappeared beneath a suburban development. What was once an officer’s cabin may be the site of some child’s playhouse or swing set. Were boy soldiers once stood in drill formation may now be someone’s vegetable garden sprouting orderly rows of tomatoes with military precision.

The landscape that was so well known to the soldiers in 1861 would be unrecognizable now.

We pulled into a maintenance shed next to the monument. Leaving the air conditioned truck, we stepped into the steamy afternoon heat and pulled on our wool uniform coats to have a picture made with the marker. I told Matt and William what I knew about the Camp, but they had already heard of it. Although there was not much to see, we speculated what the camp must have looked like. I felt a little excited to be in a place where the 6th NCST once walked. I was glad I got to share it with Matt, Beth  and William. I was glad Robert Alton shared it with me. 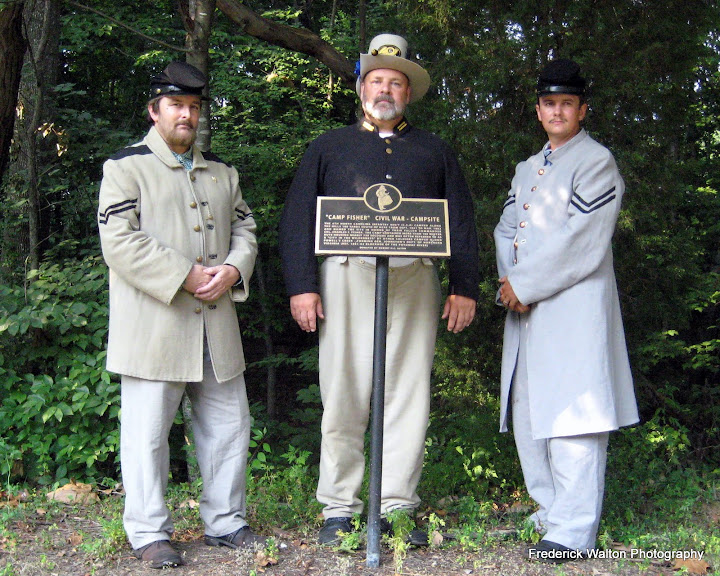 We stood behind the monument, out of time and place in our 6th North Carolina uniforms. nearby, cars whizzed by, hurrying home to start the weekend in suburbia. I don’t think any of them gave us a second glance. I wonder how many of them know they live on hallowed ground.